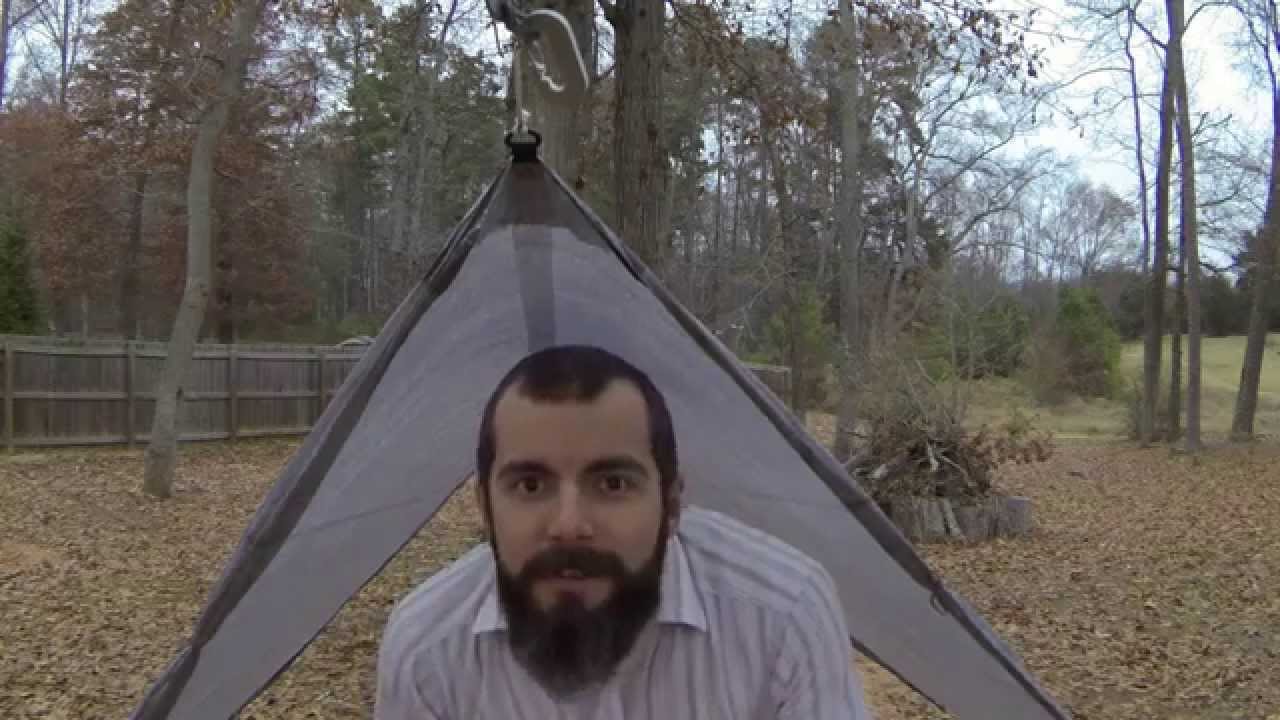 Manufacturer: BoneFire Gear, made in the USA

Jeremy Puskas, owner and creator of BoneFire Gear, contacted me a few months ago to take a look at his new offering: a self-insulated, fast-pitch hammock. The hammock Jeremy sent me was a prototype that I was able to review for a few weeks before returning. I’d like to thank Jeremy for letting me have this early, first-hand look at his creation.

Some of my observations are restricted to the prototype I tested. I know that Jeremy is making changes to the final design so please consider this review a “first look” only.

The BoneFire Gear 30° Insulated Hammock is one of a few insulated hammocks coming to market that features a sewn-in insulation, integrating the hammock and under quilt into a single system. The under quilt provides 3/4 to full-ength coverage, depending on how you hang the hammock (see tips below). The under quilt is wrapped on an asymmetric line to match the lay of the occupant. The asymmetric quilt is unique to the BoneFire. The hammock features a double layer design.

The hammock is designed with asymmetric bug netting and matching tie-outs to help hold open the bug net and hammock. On the head end, a convenient peak bag is attached where you can store small odds-and-ends. The zipper is only on one side, and purposely shorter in length to reduce weight.

One of Jeremy’s goals is to create a relatively light hammock that focuses on the quick set-up for those who are looking to go light and fast while backpacking.

Who Is This Hammock For?

Bonefire’s goal is to appeal to the lightweight crowd, by making a hammock that cuts out any extra assembly or set-up and simplify the kit. The idea is to simplify the overall setup and reduce pitching time. This hammock is ideal for seasoned hangers who favor simplicity and speed.

Insulated hammocks have been played with for years. They are a niche product to be sure, but there are some advantages that make them more than just curiosities. One downside to traditional under quilts (or even pads for that matter), is that they do not always perfectly seal around the hammock, letting in cool drafts that can cause cold spots. Insulated hammocks solve this by completely sealing up every edge. This is a no-nonsense setup.

Insulated hammocks also set up a sort of “base layer” of warmth. While there are some locations where you can sleep without any insulation, I’ve yet to camp in the northern hemisphere (even in Hawaii and Arizona!) where I didn’t need some insulation, sometimes just in the coldest parts of the night. Having a hammock with a base of insulation is a great starting point for most adventures.

A disadvantage to the BoneFire design is there is no way to vent the under quilt, so it becomes a little more limited in usage, particularly if you overheat.

An obvious disadvantage to some folks is that you become married to hammock and quilt. Hammocks by their very nature are modular systems, which allows you to mix-and-match to you hearts content. However, too much choice can often be crippling for some people, and insulated hammocks, like the BoneFire, certainly make the choice easier in may respects. I’m not really concerned about convincing anyone for or against insulated hammocks. I think this hammock would appeal to the “light-and-fast” crowd who are always on the lookout for systems integration improvements and advantages.

Generally speaking, most hammocks can be set up level and centered between the anchor points. The BoneFire hammock, in contrast needs to be set up so that the head end is a little lower than the foot end so that your torso properly matches where the insulation is sewn. A lot of hangers prefer having the foot end a little higher by choice, which also prevents you from sliding much. This off-balance set-up can take a little time to figure out on your first try, but it does make the overall lay much better in the BoneFire hammock.

The insulation also provides more coverage in this adjusted hang, especially under your legs and feet.

Jeremy has made a great video showing how to set up his hammock:

While I only had this hammock for a few days for actual testing, I was able to get into some pretty cold weather. The coldest I was able to hang in this hammock was around 15°F (-10°C) without any additional insulation underneath, except for my legs where I used a pad. I used a weather shield (a tube of fabric) that also helped eliminate any wind or air circulation. My backyard hang wasn’t ideal because I was using a stand, which makes it a little challenging to hang the head end lower than the foot (this accounts for the insulation not fully covering my legs).

The overall lay of the hammock was good, but the prototype I had was a little smaller than the production models that Jeremy is releasing. The interior felt more like a Hennessy, but the final versions should be larger.

I like the concept of insulated hammocks, but I realize they are not designed for everyone. Jeremy is the first to admit that this hammock is designed for serious hangers who are looking for specific performance outcomes. I appreciate that Jeremy knows who he is marketing to; not everyone is looking for this degree of speciality.