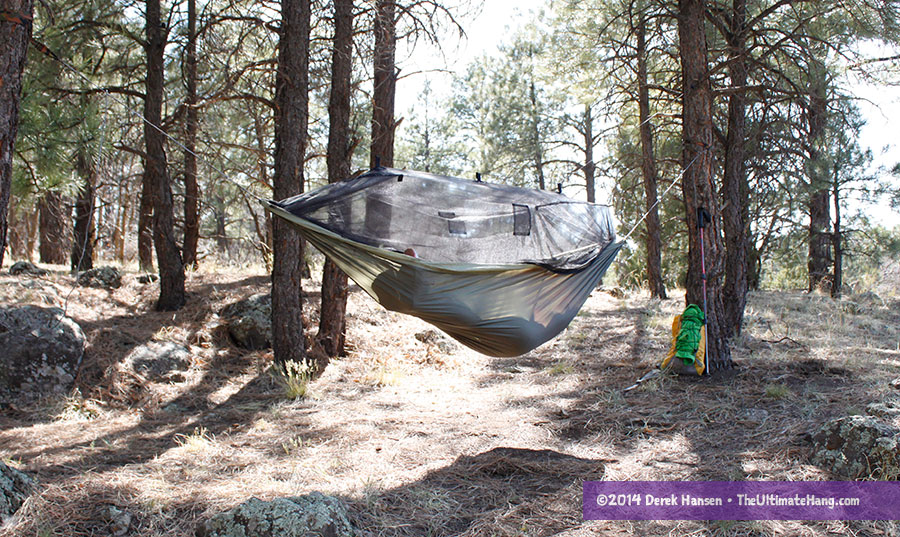 The Byer of Maine Moskito Kakoon hammock (yes, it is spelled that way!) represents an incremental change to their previous model, the Mosquito Traveller, which has been discontinued.  Fans of the Mosquito Traveller will note the similar, lightweight parachute nylon fabric and fine mesh mosquito netting, but gone are the familiar rope nettles and clew.

The main changes include a full-length hammock instead of using rope nettles on the ends. This, along with the full-size netting, provides more room inside the hammock. Another change is the inclusion of thin spreader bars to hold open the netting. These rods are 19.7 in (50 cm) long and are permenently installed in the bug netting.

The Moskito Kakoon has sewn end channels where the suspension system is threaded through. The bug netting joins the hammock fabric at this point.

The Good and the Ugly

Let me start with the “Ugly” to get it out of the way. Byer of Maine included some 5 mm accessory rope and two steel S-hooks as the suspension system for the hammock. Several years ago, a rope-based suspension system wouldn’t have garnered so much as a passing glance, but we’ve learned a lot since then. Rope-based suspension systems can do a lot of damage to an anchor point, especially trees, and are therefor generally avoided, particularly when used to wrap around the anchor. I’m disappointed that Byer of Maine didn’t include some webbing straps with the hammock.

I replaced the stock ropes with lightweight end loops and webbing straps to create anchor points around the trees.

The good news is that the suspension is easily replaced and upgraded. I recommend investing in a pair of webbing straps, at least 1 in (2.5 cm) wide to create an anchor point around a tree. The included rope can still be used as the suspension, so long as it is connected to the straps and not used as the anchor point. So, not all is lost with the included rope. Indeed, you can take and cut two 2 ft (61cm) sections from the included rope and use them to tie up two continuous loops that can be threaded into the end channels. These create great connection points to the hammock and allow for multiple suspension systems to be used. This was the first modification I made to the Kakoon after inspecting it.

The only other misgiving I had about the Kakoon, interestingly enough, was the included rods in the bug netting. My hope was that these rods were removable, but unfortunately, they are not. So, while not necessarily ugly or good, for me it lands somewhere in-between. I’ve heard that a lot of folks like the rods permanently attached, so here are my reasons for making them removable.

The reason I’m not a huge fan of the installed rods has everything to do with packing. Without the rods, the Kakoon hammock can stuff down to grapefruit size and can fit about anywhere. With the rods, the only way to pack the hammock to prevent damage to the rods, netting, or hammock, is to roll it. The included stuff sack is more than adequate to hold the hammock (and a little more), and is tall enough to accommodate the rod’s length.

The long stuff sack presents some packing challenges, particularly with the rods inside. I don’t like or recommend packing a hammock on the outside of a pack due to rain and moisture concerns. Inside a pack, the hammock should be stored vertically.

You need to be very careful when considering “net less” mode with the Kakoon because of how the net spreader poles can stress the netting.

For those interested, you can remove the but net spreader poles if you want with a little after market modification. Simply make a small incision on the inside of the hammock in the bug netting, being careful not to expose any holes in the outside. The poles can then be removed and replaced as needed.

Here’s some more good: The hammock is suprisingly light and agile and yet very durable. The fabric isn’t as thick or coarse as many parachute nylon hammocks and it feels smooth. The Kakoon fills the void left when Grand Trunk Goods eliminated the Skeeter Beeter Ultralight as a lightweight bug-free hammock shelter. This makes the Kakoon one of the most affordable and lightweight bug net hammocks on the market.

Another thing I liked about the Kakoon was the string included to pull up the bug netting off the occupant. A plastic hook and a sliding cord lock are installed on both ends of the cord. The cord lock represents an adjustable clipping point or toggle point for the hook so you don’t need to use any knots. Depending on the distance between and size of your anchors, you can wrap the cord around to clip the netting up. I’ve also clipped the cord through the webbing or suspension line with success. The cord lock makes it easy to make an toggle point; it’s quite a unique usage.

The Moskito Kakoon Hammock comfortably situated beneath a MacCat tarp.

Oh, and one more thing (and this is purely subjective): I love the color. The muted olive drab is a fitting color for the outdoors.

The Kakoon has a great price point that will be attractive to many, especially if you’re just getting started with hammock camping. But this isn’t just an entry-level hammock—the weight and pack size are also very attractive to folks looking for a lightweight hammock shelter—and, it’s not often that you can find a jungle hammock that is lightweight, durable, and inexpensive!

The zippered bug net and spreader pole provide a roomy interior, but the real limiting factor for this hammock will be the size. At only 9 ft (274 cm) long, some folks might find the hammock a little tight, although this is actually longer than most of the Hennessy models, which are very popular. This is a bit more subjective since I’ve known tall folks to enjoy small hammocks, so take this for what it is worth.