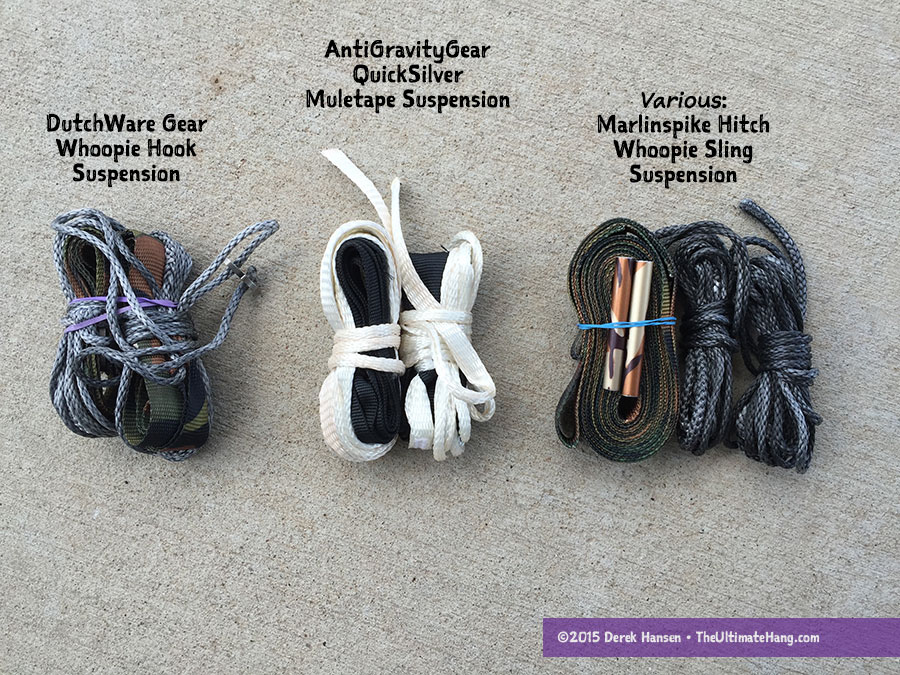 Even from the earliest days, hangers have been looking for ways to lighten and simplify hammock suspension, particularly for camping and backpacking. Some of the first suspension systems were rope-based, which were thick, bulky, and heavy. I distinctly remember getting a Grand Trunk Nano hammock—the lightest hammock on the market at the time—and noticing that my suspension system weighed more and took up more space in my pack than the hammock. I’m not advocating going lightweight as a pursuit on its own, but rather to find a balance between safety, adjustability, low bulk, and ease-of-use.

At its core, a suspension system spans the gap between the hammock and the anchor point. It should also provide a mechanism to adjust that gap, depending on how far apart the anchors are. Some systems combine the anchoring (e.g., webbing strap) and suspension into a single system. Out in the field, you don’t always know what types of trees you’ll have to work with, particularly how far apart they might be and how big around. If your suspension system isn’t versatile enough, you could be stranded.

Over the past several years, it has been interesting to track the shifts in hammock suspension. Folks have tried everything from going shorter, thinner, and even experimenting with different knots, hardware, and related techniques. Some trends have revolutionized hammock suspension completely, such as the introduction of lightweight-but-strong Dyneema cordage like Amsteel and Dynaglide. Today, I feel we are in a pretty good place where we’re finding a balance between lightweight, low bulk (easier to pack and carry), and easy to use systems. You’ll find “camps” of hangers who advocate their favorite system such as cinch buckles and straps; Marlinspike hitch and Whoopie Slings; or carabiners and daisy-chain straps.  The “best” system is what works best for you.

In this post, my goal isn’t to persuade you to pick or switch from one system to another. Rather, I want to highlight some of the lightest systems out there as a comparison. I should also note that these lightweight systems are better suited for experienced hangers. I highly recommend new hangers start with no-nonsense daisy-chain suspension. I personally use several different systems, sometimes based on the hammock I’m using, the expected trail conditions, or sometimes just to try something new. I do think it is a good idea to know a few different techniques, particularly how to use some knots or lashings when other systems fail or don’t work.

These options are listed in no particular order. The DreamHammock and Arrowhead Equipment are very similar, but I wanted to show the effect of a different length of strap to a system. (Hammeck no longer sells gear :(). These three options are virtually interchangeable as each vendor (and many others like them) can each be customized to be nearly identical to the other.