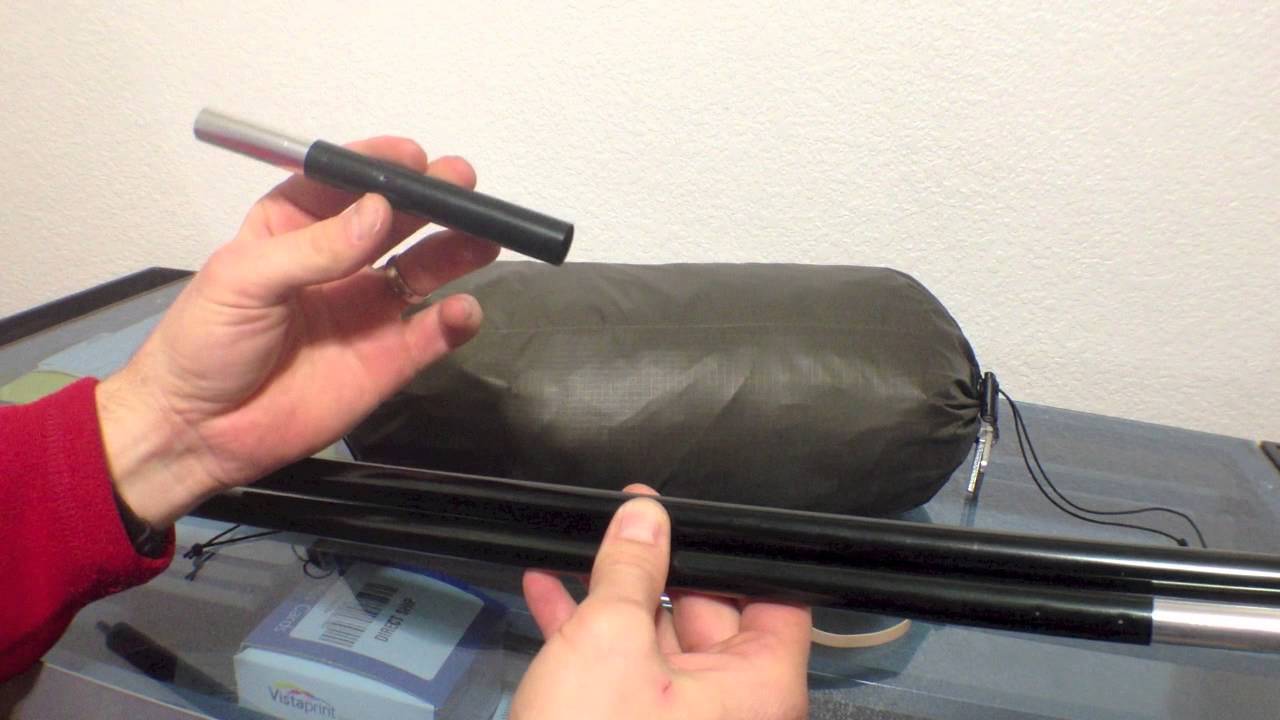 The Warbonnet Ridgerunner is a bridge-style hammock designed to have a flat, head-to-foot lay similar to all bridge hammocks. Unlike traditional gathered-end hammocks, a bridge hammock is designed more like a cot with the bed fabric spread apart with the use of bars on the head and foot ends.

The Ridgerunner includes an integrated, zippered bug net that can unzip and stow in a pocket on the foot end. When deployed, the bug net is pulled off the occupant with some shock cord on both head and foot ends. Large storage pockets, called “saddlebags,” are located on each long side of the hammock, near the head end.

The double layer hammock, which I tested, adds 50 lbs (23 kg) of breaking strength compared to the single layer model, but also forms a sleeve where a pad can be inserted for insulation beneath.

The hammock comes with appropriate rigging to hang the hammock. My hammock came with 12 ft (366 cm) long webbing straps and cinch-style triangle buckles.

I’ve had the Ridgerunner for several months now, and have used it on a few backpacking trips and several car camping trips during that time (including a few backyard hangs). It has really been a pleasure to sleep in, although I will admit that bridge hammocks have their own unique lay and may not work for everyone.

The Ridgerunner bridge hammock is sleek and refined and gives the impression of a high-performance sports car. The stitching and build are straight and solid. I did find a few loose strands of nylon on the hammock body, but otherwise it has a very clean appearance.

Like all bridge hammocks, the set-up process is different than a gathered-end hammock. First off, your hang point will be about a foot (30 cm) shorter, and when the hammock sags down it will nearly touch the ground. Once the spreader bars are in place, the hammock will raise to the right position.

The span on this set up is close to 18 ft, yet my hang point is about 4 ft off the ground.

Because the Ridgerunner doesn’t use a ridge line, it is important NOT to pull the hammock too tight, otherwise the hammock can bow backward. Keep at least a 30-degree angle coming down from the suspension lines.

All the poles are very close in size, but there are two longer poles and two shorter poles plus a very short connector pole. The two longer poles match with the connector pole to make the head spreader bar. The two shorter poles connect to make the foot spreader bar. I wish the poles were more visibly marked to aid in assembly, or if they had shock cord inside to keep them together. One of my biggest worries has been to lose the small connector tube on a hike. Unfortunately, the Ridgerunner doesn’t come with a storage bag for the poles, so keeping them contained and ready for assembly is up to me. I currently keep a few thick rubber bands around the poles and store them inside my backpack.

The bug net has shock cord with plastic mitten hooks attached on the ends. I clip these hooks to the apex of the bridge ridge point. I found I could go without clipping the foot end and I didn’t really have any sagging problems, although clipping both ends does give the netting a nice shape and maximizes the interior space.

In terms of tarp coverage, a rectangular or hex-style tarp are the best option, especially something with wide panels to fully cover the hammock. Any regular hammock tarp with a 12 ft (3.6 m) ridgeline should work just fine, although longer tarps would be better, especially if you plan on adding doors to enclose the head and foot areas. Otherwise, expect that the rigging will be exposed somewhat. I don’t have any fears of water seepage along the suspension lines as there are plenty of drip off points before any fabric is touched.

Of all the bridge hammocks I’ve tested, the Ridgerunner has the widest and shallowest bridge design of all, particularly on the head end. This is the side where most people have complained about shoulder squeeze, which is a common  experience in bridge hammocks to some extent. I have never felt any squeeze or pressure points on my shoulders or body laying in the Ridgerunner. It really feels like laying in a cot, although I will admit that in the foot end my feet do slide together. This isn’t much of a bother to me.

All bridge hammocks are slightly “tippy” and the Ridgerunner is no exception. You can remove the small connector bar on the head end to deepen the hammock bed and stabilize it more, but it does affect the squeeze in the shoulders.

Bridge hammocks, including the Ridgerunner, are less “snuggly” than gathered-end hammocks, but their flattened shape makes it easier to insulate, in my experience. The double layer, for example, makes it easy to slip in a traditional sleeping pad, but it’s more than that—the rectangular shape of the hammock means the pad doesn’t curl, crinkle, or bend inside the hammock. Wide pads (>20 in/51 cm) are best to get shoulder coverage.

The one thing that surprised me the most with the Ridgerunner was the weight. Of all the bridge hammock’s I’ve tested, I was expecting it to be the lightest, based on the light fabric, thinner webbing, and use of 7/64″ Amsteel for the suspension. However, because the Ridgerunner deploys a much wider spreader bar on the shoulders, the need for a larger triangle to create the suspension is required. Adding up the extra poll length, extra suspension material, and you then account for the extra weight. Bridge advocates, and hammock users generally agree that a few extra ounces is worth it for a comfortable night’s sleep.

Brandon has done a great job at crafting this hammock and I can find nothing on the hammock that is superfluous that could be removed to save weight—everything has been meticulously engineered to serve a necessary function. The saddlebags, for example, are not just a handy storage area, they help gusset the space between the taut hammock body and the bug netting, preventing any stress tears. It’s an ingenious design.

Besides the pole situation, the overall length of the Ridgerunner is probably its biggest shortcoming. From the tip of the triangle on the head end to the foot end, the ridgeline measures approximately 13 ft (4 m), depending on how tight you hang. This results in the longest minimum hang requirements of any backpacking hammock I’ve tested, at about 15 ft (4.5 m). This can pose a problem in finding an ideal location some areas. I’ve found that a location with 18 ft (5.5 m) or even 20 ft (6 m) between anchor points is ideal.

The Ridgerunner has a winning design in terms of sleeping comfort. The addition of the included bug net make this a real competitor in the hammock camping market. The only thing missing is a matching tarp[1. To clarify, I mean that the hammock doesn’t come with a tarp. Nearly any hammock tarp will work with the Ridgerunner, including the Cloudburst that Brandon sells, but they are sold separately].

UPDATE: Brandon sells hiking pole adapter tips that will allow you to use trekking poles as spreader bars. My concern here is that you assume some additional risks with collapsable poles, including sections slipping and pole ends not connecting adequately. Always test first!

The Ridgerunner isn’t the lightest of the bridge hammocks, but it isn’t oppressive either. Depending on the trip, I would consider packing it because of the great lay it provides. I’ll definitely bring it to base camp trips, but I don’t consider this a loaner hammock; this is a keeper.