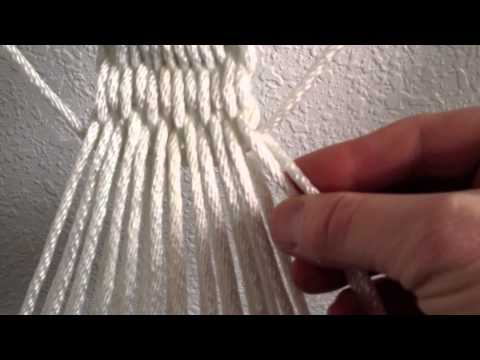 In doing research for my book, I became intrigued by the hammocks used aboard sailing ships. From what I could discover, the basic design of the “navy hammock” hadn’t changed for hundreds of years, since the time Columbus brought the hammock from the new world until the Korean War (to see some naval hammocks in action, I highly recommend the Horatio Hornblower series by A&E). I wondered if that was a testament to its utility and convenience and maybe even its comfort. My grandpa, who served in the US Navy during World War II, said that he loved his navy hammock and said that many sailors brought them home because they thought they were so comfortable.

I’ve slept in a lot of hammocks, and while I’ll take any hammock over the ground, there are some I prefer more than others given a choice. In looking at reference photos and design parameters, I presumed that the navy hammock couldn’t be very comfortable—at least compared to Brazilian-style hammocks I enjoy—since the navy version is much narrower and shorter and is hung with a shallow sag. So when the opportunity came to buy a vintage World War II US Navy hammock from eBay, I didn’t hesitate to do some first-person research.

As far as I could determine, the hammock I purchased still had it’s original clews, or hammock suspension, with natural fiber rope nettles and a steel O-ring. The hammock itself was made from a thick piece of canvas and was very stiff (likely due to its age). There are 12 steel grommets on each short end. The fabric was stained in a few places and had a variety of unpleasant smells (I can only imagine the stories behind each one!). After a few hand washings, the canvas became more flexible and the stains and smell were minimized (although my kids still say it stinks). Each clew has 12 nettles and each nettle has a bight at the end that attaches to the hammock through a grommet. A piece of 5/8″ (1.6 cm) thick hemp rope, approximately 41″ (104 cm) long threads through each bight as the nettle was fed through a grommet. It is an ingenious design, allowing the hammock to be quickly and easily disconnected from the clew for washing or repair work. In addition, the thick hemp rope prevents the short hammock from gathering up too much, thus retaining the lay of a bigger hammock with the size of a smaller one.

Although the nettles were looking worm, I decided to give the hammock a test run indoors. I hung the hammock with a shallow sag, mimicking the photos I had seen. To my surprise and delight, this hammock blew me away with its comfort. I was able to get a diagonal lay and I was surprised with out “flat” I felt. I believe the stiff fabric contributed to the flat lay by preventing my heavier torso to sink lower than my legs. I should note, however, that I believe sailors did not typically sleep on a diagonal in their hammocks while at sea. The sides were meant to wrap around the occupant, which helped prevent spill-outs, and allowed the occupant to rock back and forth safely while the ship was battered by the sea. Some photos indicate that sailors affixed a spreader bar, likely to limit shoulder squeeze. With the shallow sag and the way the fabric is “gathered” at the ends, sleeping in-line is also not horrible, but not my first choice. When sleeping diagonal, I had no shoulder squeeze issues.

I enjoyed a few nights in this hammock before some of the nettles finally wore through. I knew I was risking a failure with how old and worn the nettles were, so I decided to reconstruct the clew.

I found several variations for tying the shouldered sword mat knot that is used to gather the nettles together at the steel ring, but none of these duplicated the US Navy design.

I finally found a photo series showing a tutorial, that was close to the US Navy design, but it offered no other details or step-by-step instructions. I hated to take apart the original clew from my vintage hammock, but it was the best source I had to replicate the design. In the end, I had to do a lot of experimentation until I got something that worked.

I also decided to make a replica hammock and preserve the original. The folks who maintain the HMS Richmond have some great documentation on the Royal Navy Hammock, but the dimensions and design are slightly different for the US Navy hammock. My instructions are based on measurements I took from the vintage US Navy hammock.

The video is roughly 9 minutes long, but I wanted to make sure I walked through the process clearly enough. Please let me know if you have any questions!

UPDATE 3/22: My first replica was made from #12 Duck canvas, but that proved to be too thin and eventually ripped through at the grommets. I took the #12 from the pattern on the HMS Richmond site. I’ve found that the #4 (24-oz) Duck canvas is more in line with what my vintage hammock was made from. I’ve updated the illustration to match these findings.