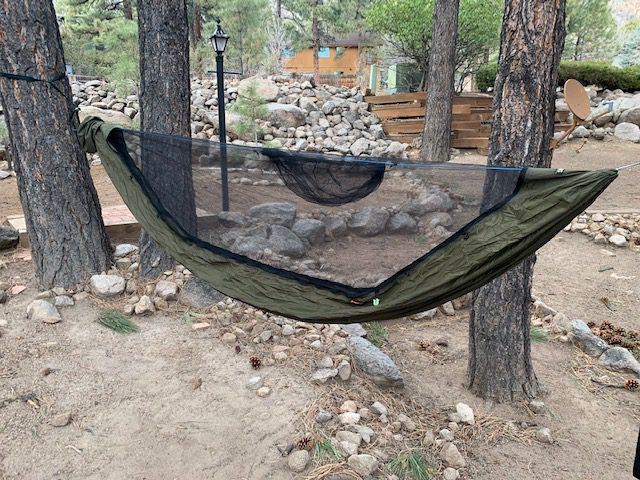 I did some freelance work for Hammock Gear in exchange for their new Netted Hammock. It’s an update from their original with some subtle improvements, notably the removable double-sided stuff sack, and upgraded attachments for storage bags and accessories. In all, it’s a comfy, versatile hammock.

Another subtle update was in the cut of the bug netting, hammock body, and ridgeline which all combined for a nice, flat diagonal lay. I was actually surprised at how flat I felt. It reminded me of the first time I ever laid in a Warbonnet hammock—the gold standard for how I measure “flatness” in a gathered-end hammock.

The bug net on the hammock has full-perimeter zipper pulls that glide easily. The zipper pulls (glow in the dark!) can be positioned on both sides of the hammock for easy access on either side. The netting can be removed almost entirely, and then stored in a peak bag on the end of the hammock. While note completely removable, it’s nice that you can turn the hammock into an open style very easily without struggling with the zippers. I really like how the zipper is designed with an easy curve around one peak.

Along with the hammock, I also got both the peak bag and the mesh ridgeline loft, or gear hammock. Both of these storage options are some of my favorite ways to store gear in a hammock. Peak bags take advantage of the “unused” portion of a hammock above your head and feet. I put the peak bag above my head end, which made it easy to access while I lay in the hammock. I store my hammock pillow there regularly, along with my top quilt.

The mesh gear hammock attaches to the ridgeline with some Prusik loops, and has some really nice metal clips that attach to the loft. Gear hammocks are versatile storage options, with less pockets and pouches to organize gear, which can be a negative, but make up for it for sheer volume. Plus, gear hammocks can be adjusted for more or less tension to hold gear in different ways.

I know Hammock Gear is trying to set up a “value” hammock—something that has all the trimmings of a top tier hammock (e.g. Warbonnet), but without the price tag. Hammock Gear has all the tie-outs, quilt clips, and accessory connections that make this a great value and a contender for any hammock on the market.

Lacking on the hammock are the storage options, suspension, and side tie-outs, all of which are available as add-ons (and added cost). Still, for some folks who already have suspension, you can save money there, and adding a peak bag or gear hammock is only a small increase in cost.