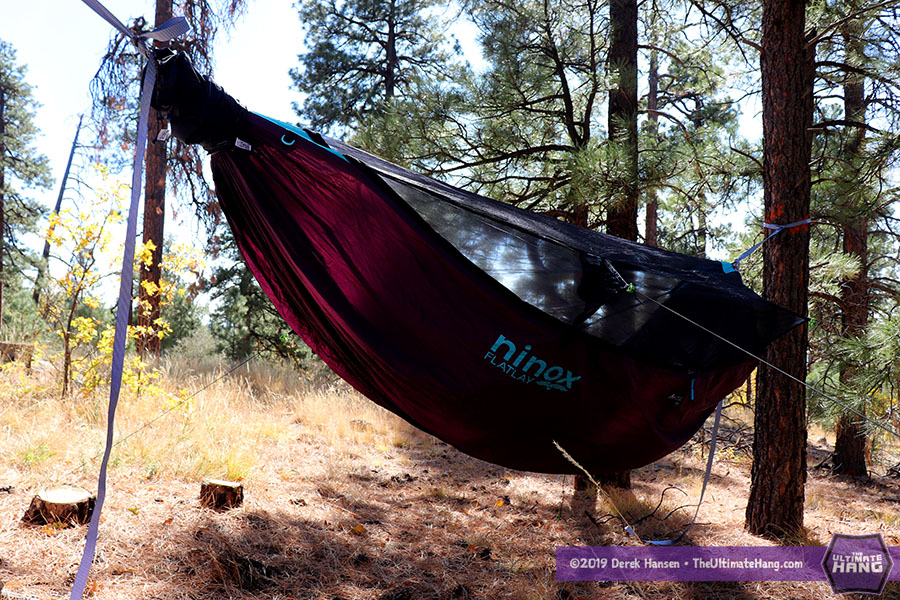 My experience with the Ninox began by backing the project on Kickstarter. I don’t often jump on new hammock projects as there are a lot of copy-cat designs out there. Admittedly, I was wrapped up in the Ninox hype, thinking that maybe Sierra Madre Research had come up with something truly unique. In the end, it is a feature rich, modular, but otherwise “regular” gathered-end hammock, with a few quirks.

The Ninox is a very capable hammock, and it borrows some ideas from several established hammocks in the marketplace: a modular/removable bug net, an optional double-layer bed, symmetrical tie-outs, and multiple clip and tie-out points. The hammock also comes in a variety of color combinations. I purchased the Indigo (deep purple) with accents.

While I was a little disappointed to find out that the hammock didn’t have any unique design (e.g., fabric cut, special foot box, etc.), it didn’t disappoint in terms of comfort. The hammock is LARGE and has a deep sag, which means getting into a diagonal lay is easy and comfortable. Even with the stretch of the fabric, I slept fine in the hammock.

Speaking of fabric stretch, the only real thing to consider is to set the hammock a little higher than you might expect, maybe 12 inches or so, to accommodate the excess drop. On my trip to the Grand Tetons, what started out as chair / sit height turned into nearly touching the ground (my insulation / under quilt was touching).

The stuff sack is pretty cool. With collars on each end, there is extra space to store the suspension without it touching the hammock. In practice, I only used one side for this extra storage.

The hardware that came with my Ninox had a minor manufacturing glitch (the adjustable toggle easily fell out), but SMr has offered a mod to fix that issue and has a new design in the works to address it permanently. The other quirk on this hammock is the zipper design. Having owned several modular hammocks, this design is the hardest I’ve ever tried to remove and then re-attach the bug net. There are four zipper pulls, two on each side. The two opposing zippers meets at the end caps and overlap one another. This overlap creates a nice seal, but it also makes it very difficult to re-attach. I found that I had to lay one of the pull cords along the zipper and then really work to connect the zipper into the hardware. The zippers also meet in the middle, along the side of the hammock. While it is nice to have zippers on both sides of the hammock, it’s inconvient to have to pull both zippers together to close it up. Other hammocks with similar zipper configurations can be connected at any point along the edge, which can be much easier to work with.

The last “issue” I’ve had with this hammock is how deep it sags away from the ridgeline. There are a few other hammocks that do this, including many of the Dream Hammock models and Hammock Gear. However, the Ninox has the deepest I’ve ever been in, which translated in a difficulty in reaching and using the organizer that is clipped to the webbing. When the hammock fabric stretched, that sag is even deeper. While this isn’t a show stopper (there are pros of having a deep sag), it’s one of the reasons I’m considering a modification (see below) so I can better use some third party organizers with this hammock.

The Ninox is a great option for big and tall folks who are looking for extra leg room. It’s spacious and roomy and the bug net makes it a great choice for camping. The hardware suspension makes adjusting easy and is a good option for those new-to-hammocks without it being too intimidating.

One thing I noticed about the hammock is that the webbing ridgeline is not connected to the suspension, but rather sewn onto the hammock. This puts a little extra strain on the fabric, and some users have reported popped seams. SMr has addressed these issues, but for me, I’m planning on changing the webbing into an Amsteel line that’s connected to the end loops. I’m also hoping this will make it easier to connect after market ridgeline organizers that will be easier to slide back and forth while in the hammock.

The other mod is to take the various shock cord pull outs that have two clip / line locks and remove one and tie a loop on on end. In the field, I found it impracticable to have two points of adjustment and the extra line lock sort of got in the way. Having a loop on one end was easier to connect to a tent stake or branch, etc., and then I could adjust the opposite end.

Here’s what I measured